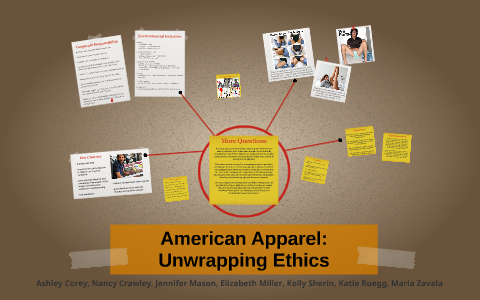 IV.       Identification and Evaluation of Alternatives

In the given case, US-based unisex clothing company called American Apparel baffles its consumers’ mind by having inconsistent practices in its business practices. On one hand, the company builds trust in consumers by constantly involving in socially and environmentally responsible practices; and on the other hand, it pursues a marketing strategy that’s considered unethical and inappropriate by the public. This discrepant image seems a major stumbling block that hinders company to grow bigger, increase sales, and become the US’ heritage brand as the CEO Dov Charney dreams.

While the company struggles with how to handle the ethical concerns of the public, the legal allegations initiated against Charney by the company’s female employees accusing him of sexual harasser in the office add spices up to American Apparel’s troubles. Further, the company’s financial state doesn’t give promising signals either, as the company is on the verge of bankruptcy experiencing difficulty to repay its debts and pushing its debt to $120 million.

The company in dilemma on whether to continue with the controversial ads based on a belief there’s no such thing as bad publicity, and any publicity is good publicity, OR start incorporating some changes in its marketing campaigns to fairly address its customers’ complaints.

This report aims to analyze the case by identifying the problems, opportunities and challenges undergone by American Apparel and also presents a SWOT analysis of the company in the given scenario. The fishbone analysis is prepared for every problem identified which allows us to come up with various alternatives. Every alternative listed have been evaluated with the possible disadvantages and advantages. The report also includes a recommended course of actions and an implementation plan prepared for American Apparel’s management to realign their business practices, keep their reputation high, stay solvent, and become a US heritage brand in the long run.

We recommend that the company takes notice of the ethical concerns of society and incorporate changes in its marketing campaigns accordingly. They can continue to promote natural beauty in women if they’d like to stick to that strategy, but not necessarily having barely dressed women in ads in pornography inducing poses.

We highlight that the company should shape a consistent and connected image overall in their business practice areas for achieving success and maintaining the sustainability of the business. It’s not enough to be ethical in some areas of the business, and be unethical in others, because in this day and age, it requires to convey a fully consistent picture overall to keep the customers engaged and satisfied with your business.

American Apparel has a huge potential to become a household brand in the US and make great profits, unless they neglect the consumers’ ethical concerns, and ignore better aligning the elements in their overall positioning.

The following issues need to be addressed:

Problem 1: There is inconsistency and baffling disconnection between the company’s socially and environmentally responsible practices, and pornography-inducing ads.

On one hand, American Apparel is the most human- and environment-friendly company in the garment industry of the country with its sweatshop-free and pro-labour policies, environmentally sustainable production techniques, and philanthropic moves. However, the company’s marketing practices are heavily condemned by the public. American Apparel ads often use very young girls with hardly any clothing in seductive poses. Inconsistency between these two approaches baffle the minds, and is questioned by the public and media.

Problem 2: CEO Dov Charney is accused of sexual harassment to his employees, and inappropriate and unprofessional acts in the office.

American Apparel is closely tied with Dov Charney’s name as he is the founder and first CEO of the company. Anything Charney does good or bad directly affects the company’s reputation and so sales. Thus, Charney using profane language, walking in his underwear in the office, flirting with employees, and keeping nude photos of them is not helpful for the company. Besides, he has got several accusations of sexual harassment from his young female employees. All these unethical and unprofessional conducts weaken the company’s image in the eyes of public and media.

Problem 3: Company’s assertively controversial marketing strategy, and sexually suggestive ad campaigns are considered too much by the customers.

Company’s belief that the consumers do not mind being marketed to, as long as the images represent their casual views about sex doesn’t seem accurate. Customers, especially those who are parents of teenage girls, are questioning the company’s marketing approaches. The matter of question that these ads trigger is: Are they ads that promote apparel, or ads that promote sex?

Problem 4: The company keeps losing money and it will go bankrupt unless the ever-increasing marketing problem is fixed.

Charney claims that things will turn around for the company by 2015, but the company’s financials don’t seem on the same page.  Locally produced organic cotton products, and sweatshop-free policies may be found favorable by the customers, but the company’s three-year-long debt history is giving high signals about that something doesn’t add up. The company is at the edge of bankruptcy, and if things are not changed, Charney’s ‘‘America’s heritage brand’’ ideal will plumb the depths.

SWOT Analysis for the Company

IV.   Identification and Evaluation of Alternatives

Alternative 2: Alternatively, the company makes some changes on the current marketing model to quell the public criticism, and tries to draw media’s attention to where the company is doing well such as its human- and environment-friendly operations.

Alternative 3: Company decides on whether it’s enough to be ethical in some areas of the business, or it requires to convey a fully consistent picture to sustain the business. They may either neglect the consumers’ ethical concerns on the marketing aspect, OR, they try to form a better alignment of all elements in their overall positioning.

Alternative 5: Company may arrange some publications and interviews on the media to showcase their fair treatment policies and family-friendly benefits to the employees, especially to female ones, to draw public’s attention from sexual harassment topic to the company’s good practices.

Alternative 6: Company may accept that in order to sustain the business and stay solvent, company needs to listen to the needs of all Triple Bottom Line parties, ie. people, profit, and planet, and address the concerns of all.

Alternative 7: Company’s marketing strategy can be made dependent on a team decision rather than only one person like Charney. A professional team specialized in marketing field can evaluate the market’s reaction better and come up with more preferable, and also profitable, strategy.

Alternative 8: Currently, Charney is the face of the company, and since he’s on the front burner with sexual harassment allegations and offensive behaviors, the management may come with a plan to reduce Charney’s influence on the company’s image, and draw Charney back from the front burner.

The following course of action should be implemented to address the problems:

If Charney manages to keep his office behaviours within ethical borders, and stop acting unprofessional or inappropriate especially concerning the company’s marketing operations, American Apparel can leverage its huge potential based on its reputable practices defying the industry norms, and become a globally known heritage brand with a proud ‘’Made in USA’’ label.

Making adjustments on the advertorial campaigns for the purpose of ensuring a better alignment in company’s overall image and positioning will help the company to showcase itself an ethically responsible organization that’s consistent and reliable in its actions. When the company understands that ethics is a must-have in all realms of the business in this day and age to survive, and satisfy the customers, the company will come to a conclusion to develop ethics orientation within the company’s culture.