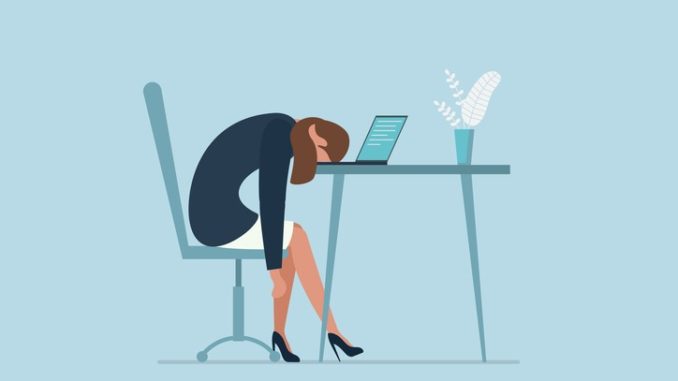 Ellen got her ”first, good – real” job [not counting the “McJobs” she had while going to school to make some money for tuition, books, entertainment, etc…]. She got this “real” job after being interviewed once during a period when unemployment was very low. Not knowing any better, she felt lucky to get this job.

In this “real” job, she had to do some real menial chores [like on occasion emptying the wastebasket from her cubicle, get coffee for her boss, or having to work on a team with “that guy that no one at College wanted to work with”]. However, she felt good about having this job. After all, they gave her a job, were “nice” at the interview, so she felt an “obligation”.

However, eventually “things” started to “get to her”, especially when she was told that “even if you don’t like it, you are paid by this company to act and behave like we want you to, especially around customers – so smile, be polite, and act right!” At times, it was very difficult, especially when she felt like telling someone “off” – but she fought his urge and complied.

Ellen considers herself to be a diligent, hard worker. She took her decision to quit this “real” job very seriously. She did engage in various ways to help herself and the work environment, but a trained, knowledgeable in OB, observer would have seen the signs/symptoms of her dissatisfaction, until she finally left.

Ellen finally got a new job. She was an enthusiastic employee when she began working in the accounting department at Fleetstab Corp. In particular, she prided herself on discovering better ways of handling paper flows. The company had plenty of bottlenecks in the flow of paperwork throughout the organization, and Ellen had made several recommendations to her boss, Mr. Johnston, which would improve the process. Mr. Johnston did acknowledge these suggestions, and even implemented a few, but he didn’t seem to have enough time to either thank her or explain why some suggestions could not be implemented. In fact, Mr. Johnston didn’t say much to any of the employees in the department about anything they did.

At the end of the first year, Ellen received a 5% merit increase based on Mr. Johnston’s evaluation of her performance. This increase was equal to the average merit increase among the 11 other people in the accounting department. Still, Ellen was frustrated by the fact that she didn’t know how to improve her chances for a higher merit increase the next year. She was also upset by the fact that another new employee, Snidely Wiplash, received the highest pay increase (10 percent) even though he was not regarded as a particularly outstanding performer. According to others, who worked with him on some assignments, he lacked the skills to perform the job well enough to justify such a high increase. However, Snidely Wiplash had become a favoured employee to Mr. Johnston, and they had even gone fishing together.

As this continued, Ellen’s enthusiasm toward Fleetstab Corp. fell dramatically during her second year of employment. She still enjoyed the work and made friends with some of her co-workers, but her spirit dwindled. Eventually, Ellen stopped mentioning productivity improvement ideas. On two occasions, during her second year of employment, she took a few days of sick leave to visit friends and family in North Bay. During her first year on this job, she had only used only 2 sick days for a legitimate illness. Her doctor even had to urge Ellen to stay at home on one occasion. But, by the end of the second year, using sick days seemed to “justify” Ellen’s continued employment at Fleetstab Corp. Now, as her second annual merit increase approached, Ellen started to seriously scout around for another job. But she’s not leaving yet, not without another job to go to.

1. What should Ellen have realized when she got her “real first job”?

She should have realized that she doesn’t choose her jobs anymore based on her Physiological or Safety needs as she did before like her McDonald’s job when she needed money to afford her tuition or entertainment needs. She now wants to satisfy her needs of Social and Esteem which makes her want to feel that she is working in a ‘’real’’ job.

Emotional labour was required when Ellen was told to smile, behave, be happy around customers at work. Ellen showed emotional dissonance when she felt to span at someone at the work but held herself.

3. What forms of Organizational Commitment are evident [and where] in various parts of this case?

4. What expressions / stages of dissatisfaction did she go through?

In her first job, she experienced the below stages of dissatisfaction:

In her second job, she experienced the below stages of dissatisfaction:

5. In her 2nd job, what signs/symptoms tell you something has gone wrong?

Ellen doesn’t feel that Organizational Justice exists in her second job. Snidely Wiplash has lower performance, but gets higher pay increase, so she thinks there is no fairness of outcome or in the distribution of rewards in the company which can be defined as lack of Distributive Justice (Langton & Robbins & Judge, 2019).

a. Use a Needs Based Theory to explain what is going on.

The needs-based from Maslow theory specifies that every employee has a unique need that requires to be fulfilled to be motivated (Langton & Robbins & Judge, 2019). Ellen is not choosing her jobs anymore to fulfil her Physiological or Safety needs as she did before, now she wants to satisfy her Social and Esteem needs as she wants to feel belongingness, recognized, and accepted.

b. Use Equity Theory [only] to explain what’s going on.

Equity Theory claims that we compare what we get from the job to what we put into it. Ellen compared her effort with Snidely Wiplash, another new employee, and became upset when she learned that he got a higher pay increase than her. This is called ‘’other-inside’’ among four different referent comparisons defined under the Equity Theory (Langton & Robbins & Judge, 2019).

c. Use Expectancy Theory [only] to explain what’s going on.

Expectancy Theory states that employees expect their effort will bring good performance, performance will bring rewards, and rewards will satisfy personal goals. When Ellen realized that her effort is recognized as a good performance and she is not rewarded by the company, she became dissatisfied and wanted to leave her second job too.