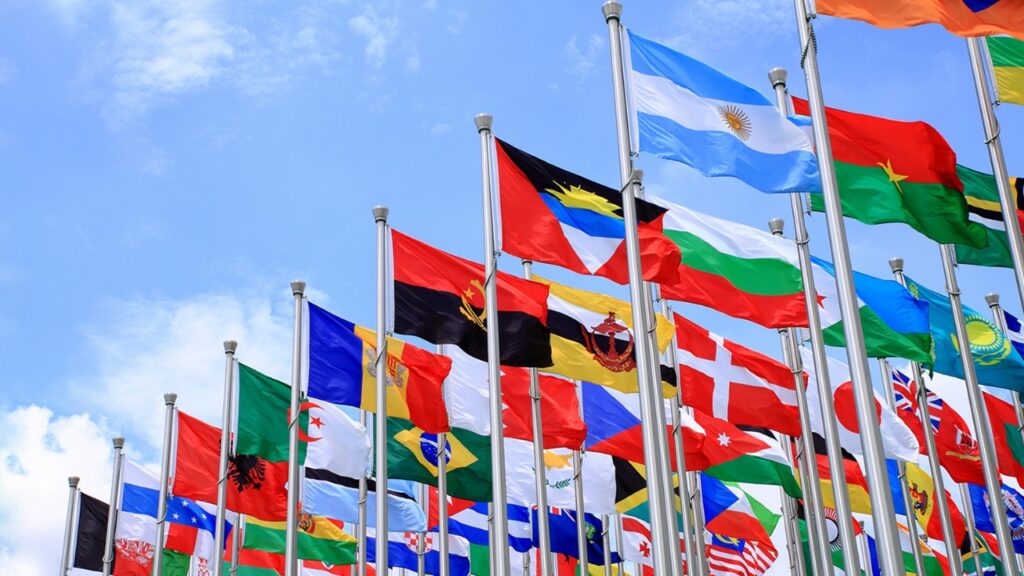 A1. Realism: Realism considers power the most important value in geopolitics and international relations. It priorities power over ethical values, moral standards, law and cooperation.

Realists believe that the states act according to their self-interest. It’s okay to be evil in the war of power and it’s far better to be feared than loved.

Realists claim human nature is selfish, and the nature of the international system is anarchy. Individuals and states must be pragmatist, and one should know how to follow evil courses if they must.

Idealism: Idealism tries to change the world through common values and principles such as equality, morality, ethics, law, cooperation, egalitarianism. Idealists believe power is not the only that matters. States may have common interests, such as bilateral trade.

Idealism claims human nature is altruistic and the states act based on the psychological motives of their decision-makers. Idealism thrives in cooperative and ethical standards and seeks to create justice and peace.

Constructivism: Constructivism seeks to find out how the states’ interests and identities are shaped and intertwined. Constructivists believe that states act and decide not only based on self-interest, pragmatist and material needs, but also social interaction. States’ actions and needs arise from interactions with other states.

One distinct representation of hard power and realism would be Trump and Kim Jong Un. These two leaders scuffled through social media more often in 2017 until Trump had a visit to North Korea in 2018. Trump threatened North Korea many times with military actions, sanctions, and starting a war against them. Kim Jong Un hasn’t stayed passive either, he responded to Trump’s words with the same coercive language based on inducements, threats, and nuclear war. Both leaders made it obvious that they rely on tangible power such as armed forces, military power, or economic sanctions and they don’t much care about morality, ethics or diplomacy.

When it comes to idealism and soft power, Germany represents a good example in Europe. Chancellor Angela Merkel has been leading the country, and also the Union, by relying on intangible power such as international business, global trade, universal values, ethics, morals, law, and cooperation. Germany is the top country in the EU in welcoming the highest number of refugees and helping them to build a new life. Merkel has a hard job, dealing with 26 other EU countries and keeping them in order using a cooperative and collaborative language is not easy. Germany’s approach of trying to maintain peace, business, and trade in the region is a good example of soft power.

Q2. Take the perspective of a Canadian living in Canada. Based on your research, your review of the following news article and your understanding of International Relations (IR) theory and practice, what are the issues facing the Canadian government and specifically the Minister of Foreign affairs? Given that there are Canadian citizens who live in Hong Kong and others who conduct business in Hong Kong, what, if any, responsibility does the Canadian government have towards its citizens living and or working abroad? What can or should, if anything, the Canadian government do and what approach should be taken and why?

A2. To be honest, I wasn’t expecting China would start arresting people this fast in Hong Kong-based on the new law. I would expect they will wait for the media to calm down and public criticism to quell a bit. They didn’t waste a second.

300,000 Canadians live in Hong Kong, it’s a significant number of people. The Canadian government is responsible for the safety of all Canadian citizens not only residing in Canada, but anywhere in the world. Therefore, anything that raises concerns against Canadian citizens’ safety is a problem for the government.

This new National Security Law criminalizes undermining the authority of the central government (Chinese government) and collusion with foreign authorities. Article 34 of the law explicitly states that foreign residents in Hong Kong can be expelled if suspected of violating the law. Article 38 reads ”The law will apply to offences committed from outside the Region by a person who is not a permanent resident of the Region”. This is a claim of extraterritorial power that goes beyond Hong Kong or China, it covers the entire world.

Hong Kong is (was) a city of protest. The opposition movement, pro-democracy marches unshackled media, dynamic public discourse… Hong Kong was an autonomous country whose citizens enjoy the freedom of expression. Well, the new law says no more… There are people arrested already because of the stuff they posted on social media. No freedom of expression anymore in Hong Kong.

Firstly, if not yet done, the Canadian government should inform its citizens in Hong Kong about this new law, its broad implications, and possible applications. Other than the individuals, the companies who operate, make business, or trade in Hong Kong should be advised of the same too.

The law has a broad language when it comes to the criminalized activities which provide the Chinese government with a large room to interpret in any desired direction. There are already people arrested and or issued warrants in and out of Hong Kong. Canadian entrepreneur and former diplomat, Meng, was arrested in Hong Kong and extradited to mainland China in 2018. Michael Spavor and Michael Kovrig, Canadians again, were incarcerated in China too.

Secondly, Canada should be in diplomatic contact with Hong Kong and Chinese governments to make sure that none of the Canadian citizens will be harmed, arrested, or forced to stay in the country unnecessarily.

If any Canadian citizen residing in Hong Kong wants to live the city-state now, the Canadian government should liaise and collaborate with the Hong Kong government and make sure the Canadians will be able to leave the country without any problem. Canada should move quickly to help its people while they are still able to leave just like the human rights activist Mr. Rogers said.

Moreover, article 32 of the law states that “Proceeds obtained from the commission of an offence under this Law including financial aid, gains and rewards, and funds and tools used or intended to be used in the commission of the offence shall be seized and confiscated”. Canadian companies doing business in Hong Kong should be advised of this clause.

Further, Canada should have diplomatic discussions with other foreign governments too in order to discuss how to approach China and how to treat Hong Kong in light of the current news.

Anyone who wants to travel to Hong Kong, either for business or fun purposes should be clearly advised and warned of the current situation there.

To conclude, the Canadian government should follow the news about Hong Kong very carefully. Things might get accelerated, or even get out of control. Hong Kongers are not happy, and they will seek for freedom for sure. If the Chinese government aggravates its measures and punishments, Canada may have to move fast to contact with its citizens living in Hong Kong to help them evacuate.

A3. We examined the implications of two supranational trade agreements, namely United States–Mexico–Canada Agreement (USMCA), and Comprehensive and Progressive Agreement for Trans-Pacific Partnership (CPTPP), for Canada, as well as our company, Lululemon.

Lululemon & Apparel Industry: Lululemon is an athletic apparel manufacturing company. It’s originated in Vancouver, Canada, yet as of 2020, has 500 stores globally, most of which are in North America. Lululemon’s product focus is on yoga, fitness, pilates, so mainly in athletics. Target customers mainly consist of young, fitness fan individuals. Apparel industry focuses on manufacturing ready-to-wear clothing, and mass-produced garments. Lululemon has a huge potential especially in the countries where the youth population is high and growing.

USMCA – opportunities and risks: USMCA is the free trade agreement signed by the US, Canada, and Mexico, dated November 30, 2018, came into effect on July 1, 2020. It’s the successor of NAFTA dated 1994. NAFTA has been replaced by USMCA because Trump claimed NAFTA is a nightmare and the worst deal ever in US history.

USMCA introduces new clauses to address certain challenges that, allegedly, NAFTA has been a failure to deal with. It aims to promote trading relationships between the three signatory countries addressing 21st-century trade issues. It secures the countries’ bilateral relations and encourages more business opportunities in various industries, including the manufacturing and apparel industry. USMCA, like its predecessor NAFTA, regulates the largest free-trade region in the world which is a powerful regional bloc for the three countries competing against Europe and East Asia counterparts.

When it comes to risks, the main risk of USMCA is the increased vulnerability for Canada with another trade agreement with the US. Canada’s 76% of exports already go to the US while the US has only 18% of its exports with Canada. Every trade agreement we make with the US is making us dependent on the US market. If the government relations deteriorate, Canadian exporters and importers will likely to struggle more than their US counterparts.

CPTPP – opportunities and risks: CPTPP is another free trade agreement signed by Canada with 10 other Asia-Pacific region countries. CPTPP has the potential to increase Canada’s international revenue by $147 billion yearly. The agreement ensures that the trading companies between the signatory countries are protected from any unfair treatment, and they will enjoy greater transparency, security, and certainty. Customs duty will be removed on 95% of goods including apparels and textiles traded between the countries.

The biggest advantage for the CPTPP for Canada is that the United States is not part of the deal. This deal gives Canada a huge opportunity to diversify its international trade portfolio, and decrease its dependency on the US market. The main risk of the CPTPP is that one of its provisions allows multinational corporations the ability to sue governments in Canada.

Recommendations: Lululemon can benefit from USMCA to expand its presence in Mexico enjoying free tariffs and less paperwork. The country has a massive youth potential as the median age in Mexico is below 30 years. Mexico is almost an untouched market for Lululemon as the company has only 2 stores, and 1 showroom in Mexico as of 2020 whereas it has more than 300 stores in the US. Mexico is the second closest country by land for Canada, but while 16% of the US’ exports go to Mexico, only 1.2% of Canada’s exports go to Mexico.

Under the CPTPP, Lululemon can consider expanding its stores to one of the Asia-Pacific signatories such as Singapore. Singapore is one of the fastest-growing and most dynamic markets globally. Free or eliminated tariff rates, security, confidence, transparency, and fair politic treatments are only some of the benefits of the agreement that are calling Canada and Lululemon to increase trade relations with the Asia Pacific region.