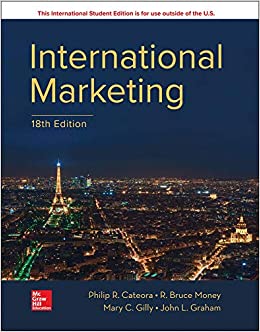 It exists in the mind of each person.

He claimed that new ideas moved more quickly from east to west than from north to south.

The marketer’s interaction with the local culture determines whether the marketing will fail or succeed.

They anticipate changed in markets where they are presently doing business

They pay attention to cultural differences in markets they are attempting to enter.

It was easier for ideas and information to travel over the Silk Road instead of crossing the Sahara or the Isthmus of Panama.

Religion has an enormous effect on a society’s values.

Women have more time to spend on their careers.

They influence people to live in peace together. They teach each new generation how to act in an acceptable way.

People are spending time with media such as television and the internet instead of socializing with their families,

It is easier to communicate with consumers who can read and write than with people who can understand only symbols.

Societies become acquainted with most new products via businesses.

Subdue the individual and favour the group.

The Individualism/Collective Index.   It focuses on self-orientation

The Power Distance Index.    It focuses on authority orientation

The Uncertainty Avoidance Index.    It focuses on risk orientation

The Masculinity/Femininity Index.    it focuses on assertiveness and achievement.

Are connected to others, but only in a loose way.

A culture that encourages individual ambition.

Which of the following statements regarding cultures that score high on the Individualism/Collectivism Index is true?

Personal ambition and free will are valued and encourage in these cultures.

They tend to distrust people who are not part of their groups.

Are likely to hold egalitarian beliefs.

Embrace an “I” mentality.

Cultural values can help marketers predict which consumers are most apt to buy something on impulse.

They usually think people should be treated equally, and they say power comes from knowledge.

FALSE: This statement is false. Cultural values can predict whether a consumer is apt to complain and how that person might react to service failures.

Decrease in cultural  distinctiveness around the world.

TRUE: one person’s beliefs are sometimes another person’s funny story.

The most obvious rituals take place when people are experiencing turning points in their lives.

Around the world, the number of spoken languages has been dwindling.

when doing business in a foreign country, ignoring how seriously the local people take their superstitions.

focus on the central figures and not see much of the background.

TRUE: This statement is true. Marketers must understand how their own cultures influence their assumptions about another culture.

understand how a culture began and what its essential beliefs are.

know how people resist change within their cultures.

FALSE: This statement is false. Cultural values can predict whether a consumer is apt to complain and how that person might react to service failures.

A marketer assessing a society should remember that cultures are constantly changing.

tend to see the entire picture rather than just the foreground when evaluating a situation.

It can lead people to think that cultures have more in common than they actually do.

Which of the following are advantages of cultural sensitivity in international marketing?

It reduces strife between marketers and their customers.

It enables communication between marketers and consumers.

they also resist change, which is one of their fundamental attributes.

When people are introduced to a belief or practice from another culture and they approve of it, they incorporate it into their own culture.

Two cultures that speak the same language might interpret certain phrases or words in a very different way.

TRUE: This statement is true. A marketer must remember that a culture borrows and then adapts and customizes to its own needs and idiosyncrasies. Thus, what may appear on the surface may be different in cultural meaning.

generate the most interest within society.

countries depending more on one another, both economically and socially

people have some reason to be quite interested in the innovation

the innovation will not disrupt existing beliefs and behaviors very much

avoid the belief that consumers throughout Europe want to purchase the same products.